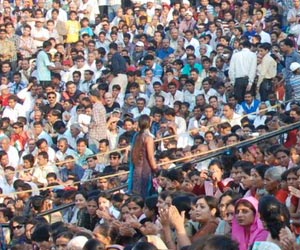 Current Population of India - India, with 1,350,601,356 (1.35 billion) people is the second most populous country in the world, while China is on the top with over 1,469,523,874 (1.46 billion) people. The figures show that India represents almost 17.85% of the world's population, which means one out of six people on this planet live in India. Although, the crown of the world's most populous country is on China's head for decades, India is all set to take the numero uno position by 2030. With the population growth rate at 1.2%, India is predicted to have more than 1.53 billion people by the end of 2030.

Every year, India adds more people than any other nation in the world, and in fact the individual population of some of its states is equal to the total population of many countries. For example, Population of Uttar Pradesh (state in India) almost equals to the population of Brazil. It, as per 2001 Population Census of India, has 190 million people and the growth rate is 16.16%. The population of the second most populous state Maharashtra, which has a growth rate of 9.42%, is equal to that of Mexico's population. Bihar, with 8.07%, is the third most populous state in India and its population is more than Germany's. West Bengal with 7.79% growth rate, Andhra Pradesh (7.41%) and Tamil Nadu (6.07%) are at fourth, fifth and sixth positions respectively. The sex ratio of India stands at 940. Kerala with 1058 females per 1000 males is the state with the highest female sex ratio. Pondicherry (1001) is second, while Chhatisgarh (990) and Tamil Nadu (986) are at third and fourth places respectively. Haryana with 861 has the lowest female sex ratio.

Some of the reasons for India's rapidly growing population are poverty, illiteracy, high fertility rate, rapid decline in death rates or mortality rates and immigration from Bangladesh and Nepal. Alarmed by its swelling population, India started taking measures to stem the growth rate quite early. In fact India by launching the National Family Planning program in 1952 became the first country in the world to have a population policy. The family planning program yielded some noticeable results, bringing down significantly the country's fertility rate. In 1965-2009, the contraceptive usage more than tripled and the fertility rate more than halved. The efforts did produce positive results, however, failed to achieve the ultimate goal and the population of India since getting independence from Britain in 1947 increased almost three times. Whereas India has missed almost all its targets to bring the rate of population growth under control, China's 'One Child Policy' in 1978, has brought tremendous results for the latter. The policy claims to have prevented between 250 and 300 million births from 1978 to 2000 and 400 million births from 1979 to 2010.

What is the Population of India in 2017
With high Population growth rate, India's Population was recorded to be 1.34 billion by the end of year 2017.