Through this write up we are tracing the profile, carrier and biography of Indian women athlete, P.T.Usha. P.T.Usha was known as the sprint queen. 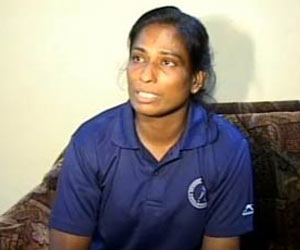 P. T. Usha - P. T. Usha was one of India's best-known women athletes. She remained the queen of track and field for almost two decades. P.T. Usha was fondly called the "Payyoli express" and the golden girl because of her awesome speed on the track.

Achievements And Accolades
Through out her illustrious carrier, Usha won many national as well as international awards. P. T. Usha has won 33 international medals including 13 Gold medals in the Asian Games and Asian Championships. In all, Usha has won thirty International Awards, for her excellence in Athletics. P. T. Usha received the Arjuna Award in 1984. The next year she was adjudged the best women athlete the Jakarta Asian Athlete Meet. She was also awarded the Padma Shree in 1984. In the Seoul Asian games of 1986, Usha won the Adidas golden Shoe award for the best athlete. P. T. Usha was named the 'Sportsperson of the Century' by the Indian Olympic Association.

Turning Point
As a child Usha showed an early aptitude for sports. This won her a scholarship of Rs. 250 from the Kerala government and led Usha to a special sports school at Cannore. In 1979 Usha participated in the National School Games. It was here that O. M. Nambiar (who coached her throughout most of her career) spotted her. He realized that this girl had a great potential. This proved the turning point of her illustrious carrier.

P.T.Usha Biography
Payyoli Tevaraparampil Usha was born in a poor family in Meladi-Payyoli village, near Calicut (Kozhikode), Kerala on June 27, 1964 Kerala. Usha had to face ill health and poverty as a young girl. The initials in Usha's name stand for Payyoli Tevaraparampil, her family names, according to the traditional naming system in South India. Usha began her international carrier at the Moscow Olympics in 1980 but she proved her real mettle in the 1982 Asian Games in New Delhi, winning the silver in the 100 m and 200 m event. The Jakarta Asian Meet in 1985 Usha elevated her to the position of the sprint queen as she won five gold medals (in the 100m, 200m, 400m, 400m hurdles and the 4x400m relay) and a bronze in the 100m relay. 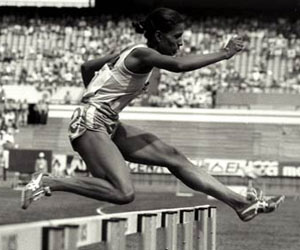 The Seoul Asian games proved an icing on cake of her athletics carrier, where Usha notched up four Gold medals and silver. In 1991, Usha married V. Srinivasan and gave birth to a son, Ujjwal. Later, P.T Usha started an athletics school at Koyilandi near Kozhikode, Kerala to impart training to girls from all over the country. This school recruits children in the 10-12 age group.

Ups And Downs
The illustrious carrier of P.T Usha speaks for itself. She has been the finest women athlete India has ever produced. Throughout her carrier Usha never looked back. In fact, at one point of time she returned back to track after a gap of 4 years and won a silver medal at the Hiroshima Asiad! But the greatest disappointment came at the Los Angeles Olympics, where Usha missed the bronze medal by just 1/100th of a second. This was a heart break for the whole country.