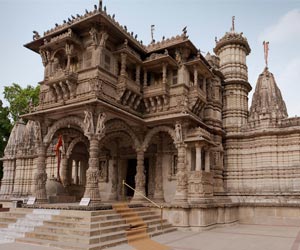 Areas in Ahmedabad - Downtown city's urban look is matched by the walled city with the traditional and ethnic settings of the pols. Since Ahmedabad was the second planned city of India after Chandigarh, all city offices, major centers and residential colonies haven been well placed and maintained by Ahmedabad Municipal Corporation. In order to facilitate the efficient administration, the city has been divided into five main regions, East, West, North, Central and South Ahmedabad.

North Ahmedabad: The Northern part of the city houses residential societies like Meghani Nagar, Nirnay Nagar, Shahibaug and Sabarmati, the Regional Transport Office (RTO) and the office of the Gujarat Electricity Board. In the north-eastern part, several textile mills are also located.

Some holy palces in North Ahmedabad:

South Ahmedabad: The southern part of the city is a sprawling area with two popular lakes - Chandola Lake and Kankaria Lake. This area also has its own railway station at Maninagar. For little time out options, there a few swimming pools, movie theatres and as well as public parks.

Areas in Under South Zone: