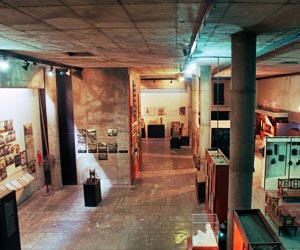 Museums in Ahmedabad - Ahmedabad can also be called a city of museums, for the city hosts a number of museums covering a variety of subjects.

The City Museum/Sanskar Kendra and Kite Museum are both housed in the same building opposite the Gujarat University. While the former contains archaeological exhibits related to the city and the state, the latter is entirely devoted to, obviously, the kites of many places in the world.

L.D. Museum of Indology has a large display of Indian artefacts and has a section devoted entirely to Jain art, while the N.C. Mehta Museum of Miniature Paintings houses priceless pieces dating as far back as the 16th century. Both these museums are located within L.D. College of engineering complex at Gujarat University.

The Gujarat Vidyapith Tribal Museum on Ashram Road has tribal artefacts and drawings of aboriginal lifestyles housed in an institute envisaged by Mahatma Gandhi.

Two other specialized museums are Shreyas Museum of Folk Art at Shreyas School Compound, Manek Bagh, devoted to fold arts of Gujarat and Veechar Museum of Utensils in Vishala complex, displaying traditional and ancient utensils used in the country.

The Gandhi Ashram Museum at the Ashram is worth a visit and has a picture gallery commemorating events from Mahatma Gandhi's life and the freedom struggle, as well as a memorial museum of 30,000 letters written to and from the leader, his writing desk, spinning wheel, footwear, attires and other memorabilia.