Amritsar is home to several famous tourist attractions which are worth visiting while in the city. Explore local sightseeing in Amritsar for tourist. 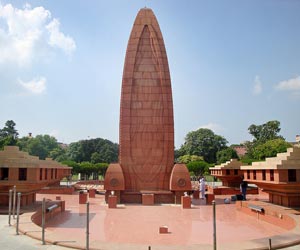 Sightseeing in Amritsar - The city's most compulsive site is the holy Golden Temple around which the old city revolves. The most sacred temple of the Sikhs is a centre of activity from early morning till late at night with a steady stream of pilgrims. Very close to it is the historical Jallianwala Bagh, where hundreds of unarmed men, women and children were massacred in 1919 by the ruling British forces. The site has now been turned into a memorial and houses a museum and picture gallery portraying the events of the memorable day.

Durgiana Mandir, a Hindu temple and almost a replica of the Golden Temple, near the Lohagarh Gate of the old city, is another important place to visit. Maharaja Ranjit Singh provided the gold cover to the temple. The Maharaja made another important contribution to the city, Ram Bagh, a large garden, now in the centre of the city, in which he visited his summer palace. The garden now provides a very welcome green lung to Amritsar. The palace has been turned into a museum displaying many items connected with the maharaja and the history of the city.

The city is only 28 km from the international border with Pakistan, the crossing point being at the Attari/Wagah Border post. Twice every day, border guards of the two countries perform a joint drill, marked by precise coordination and formality. The display is open to public in the evening and draws a large attendance. There is no entry fee. However, to secure a choice viewing place it is best to be at the border fairly early. The time of the ceremony is determined by the time of sunrise and sunset. You will need a taxi, contracted for return, to visit the border post.