Bangalore is one of the well connected cities of India via rail, air and road. Know more on how to reach Bangalore by different means of transport in India.

How to Reach Bangalore

How to Reach Bangalore - The city of Bangalore is one of the world-class cities in India. Good network of roads connects Bangalore to other parts of India. There are plenty of trains to Bangalore from major metros of India. Flights are available in plenty of numbers for Bangalore. All the major airlines operate daily or weekly flights to and from Bangalore in India. Know more on how to reach Bangalore.

Airport
Hal Airport
Location: Eastern side of town
Services: These include Air India, Lufthansa, British Air-ways, Air France, Sri Lankan Airlines, Jetstar Asia Airways, Singapore Airlines, and Malaysian Airlines, with Emirates and a few others due to commence direct flights this year. The air over the airport is thick with domestic airliners, too, including Air Deccan (low-cost, no-frills) and Kingfisher Airlines 9the 'Fun liner').
Facilities: Not to international standards but well maintained. A couple of international airlines have opened their own stand-alone lounges at the airport for passengers' comfort.
Transfer: Taxi or auto rickshaw from the respective prepaid booths inside the airport itself. 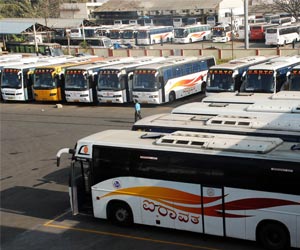 Kempegowda Bus Terminus (KSRTC Bus Terminus)
Location: Right opposite the City Railway Station and Local Bus stand
Services: Both government-run (by the KSRTC - the Karnataka State Road Transport Corporation) and privately-run buses are available.
Facilities: One of the busiest junctions, especially on the week-ends and holidays. Except of two cloak rooms nothing is offered here.

City Railway Station
Location: 12 km from the airport and located in Majestic, bang in the centre of the city.
Services: Daily trains connect the city to other important metros like Delhi, Chennai, Hyderabad, Cochin, Mumbai and also to tourist hotspots around Bangaluru like the royal city of Mysore and the World Heritage site of Hampi.
Facilities: Separate restroom considering the Class of travel has now been introduced at the station. Food courts are currently being set up on the platforms. Café shacks already serve hot beverages. Computer reservation counter is open from 8 am - 8pm.

Bengaluru Cantonment
Location: North of centre near CBD, Indiranagr and Koramangala
Services: Almost all trains stop at this station.
Facilities: Restrooms are available. Computer reservation counter is open from 8 am - 6pm