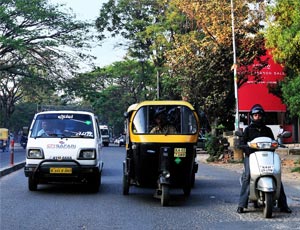 Local Transport in Bangalore - The easiest way to get around Bangaluru is to hop into the nearest auto rickshaw that is willing to go in the direction you want to. The experience, however, is not for the faint-hearted. Be prepared to hail several autos and be rebuffed when you mention your destination, especially as it gets later in the evening. Also, be prepared to haggle - although paying the fare you run up on the meter is generally acceptable, you may be asked to pay one and a half times, or even double, the meter fare if it is later than 7 pm, and if it is earlier than 7 am but you want to go a little off the driver's regular beat, or if you have luggage, or if it is a Sunday or public holiday, or if you happen to be standing outside a posh hotel or mall, or if you simply look like the kind who can be browbeaten or gypped into paying what the driver demands. The nice thing, however, is that, in general, auto drivers are honest and friendly, and taking an auto at any time of day is quite safe.

If you would prefer to shut out the noise and the pollution, though and spend quality time with a book or the newspaper in the midst of a traffic jam, take a taxi in Bangaluru but something better, a call taxi that can be called up by telephone. Unless you book the taxi for an entire day, be prepared for the taxi to not arrive at the stipulated time.