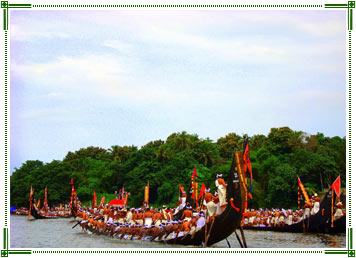 Aranmula Boat Race, often known as Kerala Boat Festival is one of the glorious occasions of Kerala and is the unique feature of the backwaters of Kerala. Much famous all over the world, it has become the icon of Kerala and attracts of thousands of tourists to the state. A dramatic spectacle on the Pamba River in the Kuttanad region at Aranmula, the water water carnival and snake boat race is the one of the most joyous even held in the week of the great harvest festival of Onam. Undoubtedly, it is Kerala's most important celebration and the stately snake boats of Aranmula called 'Palliyodams' form part of an age-old temple ritual. The legend says that once pirates plundered a small boat carrying offerings to the Krishna temple here. That night, Lord Krishna appeared in the dream of his devotee who was very distraught over the incident and advised him that he should build much larger boats that can be rowed by a hundred to hundred and fifty skilled oarsmen. These boats will surely glide swiftly in water and could outrun any pirate boats in the vicinity thus making them safer. This is how the speedy 'Chundan' or snake boats are said to be conceptualized that were later modified into different types of snake boats.

The legend forms the basis of almost all the snake boat races and the boat festival of Kerala. The villagers owning the boats are proud of them and take good care of them. Built by the master boat builders, the ingenious boat-building techniques are passed on from generation to generation. These handmade boats are crafted with great care and the first critical trial run of a new boat is the village event where hundreds of curious and eager onlookers come to see its performance. Today more than 40 snake boats take part in the race. The Aranmula Boat Race is held annually, often during August or September and is part of the Aaranmula Temple festival. The snake boats are about 100 feet long. The snake boats are so called because their curved stem resembles the hood of a snake and a tampering bow. During this occasion, all the boats are adorned with silk and golden glittery umbrellas and there is a crew of more than 100 men rowing the boat. Besides the speed, it is the graceful rhythmic movements of the boat and the oarsmen that look amazing.