A complete guide on fairs and festivals celebrated in Kerala. Know more on famous festivals and holidays in Kerala 2021. 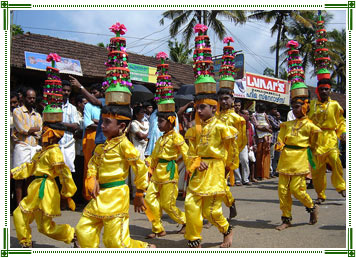 Festivals in Kerala are showcase to the religious institutions of the state and have some of the most interesting legends attached to them that are mostly mythological in origin. They offer the opportunity to the Keralites to socialize and stage their unique performing arts that are a vital part of the identity of the state. The traditional lifestyle and the rituals of the festivals are faithfully followed and there is often vibrant music, dance performances. Grand processions featuring bedecked Indian elephants and beautiful and creative fireworks that are so loved all over India and the world. Besides the harvest festivals there are temple festivals of Hindus known as 'Utsavas' and the festivals held at Christian and Muslim religious places, often known as 'Perunals'. The enthusiasm and festivity are the moods of the auspicious occasions. The other major festivals are most often related with boat races that are unique to the state along with the tourism festivals organized by the Government.

Vishu is the New Year Eve according to the old traditional Malayalam calendar and falls in the month of April. 'Kani-Kanal' is the main dish of the festival and Kani of the temples of Guruvayur, Ambalapuzha and Sabarimala in Kerala are famous. Trikartika is celebrated as the birth of Goddess Bhagvati. The celebration of Maha Shiva Ratri at Siva temple at Alwaye on the banks of the Periyar River is a splendid one featuring shows, dances and dramas. Thiruvathira is celebrated to commemorate the death of Kamadevan, the cupid of Hindu mythology and dance known as women perform Thiruvathirakali or Kaikottikkali during this occasion. Kerala Boat Festivals are a must-see. Water carnivals and snake boat races are the highlights of Kerala.

Onam
The harvest festival of Kerala, Onam is a time for sports, festivities and ritual celebrations in Kerala. According to the legend Kerala was once ruled by the kind, generous and valiant demon-king Mahabali, who had won over the kingdom of heaven rightfully.

Thrissur Pooram
Thrissur Pooram is celebrated in the Malyalam month of Medom, which usually falls in April or May. The Thrissur Pooram features cultural potpourri and artistic performances of Paramekkavu and Thiruvambadi groups who vie with each other for the best performance.

Aranmula Boat Race
Much famous all over the world, it has become the icon of Kerala and attracts of thousands of tourists to the state. A dramatic spectacle on the Pamba River in the Kuttanad region at Aranmula, the water water carnival and snake boat race is the one of the most joyous even held in the week of the great harvest festival of Onam.

Nehru Trophy Boat Race
The fantastic and magnificent races feature glorious snake boats or 'Chundans' that glide swiftly and elegantly through the backwaters of Alleppey as guided by the skilled oarsmen that move in a rhythmic fashion accompanied by the boisterous boat songs known as 'Vanchipattu' that seem to entrance the boatmen and the spectators alike in their vibrant spirits. Nehru Trophy Boat Race is reputed to be the most colorful water sport in Kerala and has gained the status of the prestigious cultural event of Kerala that attracts onlookers and tourists from all over the world who come here to witness the event. It is said that in 1952, Pandit Jawaharlal Nehru, the first Prime Minister of India, visited the erstwhile Travancore-Cochin. It was in his honor that the first boat race was organized at the spur of the moment.

On his way to Alleppey from Kottayam, people of Alleppey gave him a roaring reception and escorted him by the huge snake-boats. The tremendous excitement of sailing in a snake-boat or 'Chundan', the sportive spirits of the participants and the grandeur and festive mood of the occasion so entranced Panditji that he donated a trophy to be awarded to the winners, which was a replica of a snake-boat in silver, placed on wooden abacus. The inscription on the trophy says "To the winner of the boat-race which is a unique feature of community life in Travancore-Cochin" and is followed by Nehru ji's signature. The trophy came to be known as 'Nehru Trophy', after which the boat race was named. This aquatic festival is a wonderful occasion that fosters a sense of unity and fraternity among the participating youths and promote the sports man spirit in them.