Where: Vadakkunnathan Temple in Thrissur (Kerala) 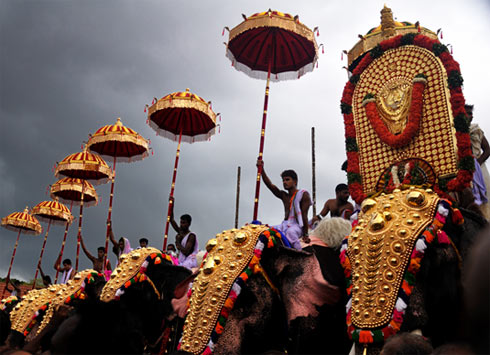 Thrissur Pooram Festival is one of the most splendid and colorful temple festivals of Kerala. Introduced by Sakthan Thampuran, the Maharaja of erstwhile Kochi state, Thrissur Pooram is celebrated in the Malyalam month of Medom, which usually falls in April or May. The Thrissur Pooram features cultural potpourri and artistic performances of Paramekkavu and Thiruvambadi groups who vie with each other for the best performance. The extraordinary, astounding processions from Krishna Temple and Devi Temple are some other highlights of the festival. On the day before the last day of the festival, the groups enter the Vadakumnatha Temple through the western gate and come out through the southern gate to parade face to face with each other. Caparisoned elephants and the exchange of umbrellas look dazzlingly beautiful and mesmerizing.

The amazing fireworks exhibited by the two-temple groups create beautiful splendor in the Thrissur sky that looks like a rich tapestry. The charming music of Panchavadyam, a combination of five percussion and wind instruments, is pleasing to the ears. Thrissur Pooram is in fact the conclusion of the eight-day Utsavam of nine temples and all the groups strive to be their best and hence, each party to excel the other does the hiring of elephants and parasols in the utmost secrecy that are paraded from early hours of the morning and celebrations continue day and night till the dawn next day. The Pooram Festival is so called because it is believed that dynastic gods and goddesses of neighboring provinces meet annually for a day of celebration in one of the spring months. 'Pooram' means groups. Some of the prominent Pooram celebrations are held at Aratupuzha, Uthralikavu, Cheeramkulangara, Thrissur, Mannarkad, Perumanam, Pariyanampetta, Aryankavu, Mangottu, Kodikal, Medamkulangara and Thirumandhamkunnu. The traditional groups representing the main geographic divisions of Thrissur are Paramekkavu and Thiruvambadi.