Sikh Festival Calendar 2021 features Sikh Holidays for the year 2021 with there dates. Check out dates for Gurupurabs and Sikh Festivals in 2021. 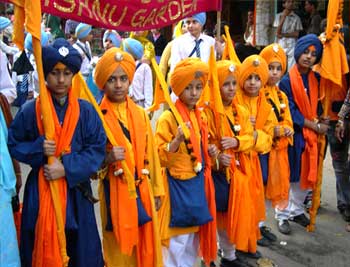 Sikh Festivals in India - Sikhism is one of the important religions in India and there are many festivals celebrated by Sikh/Punjabi community. Most of the Sikh festivals are events to commensurate the birth and teachings of 10 gurus of Sikhs and their teachings. The birthdays of all Gurus especially the first and last Sikh Guru is celebrated on a grand level. The other festivals that hold significant importance in Sikh festival calendar are Baisakhi, Hola Mohalla and Diwali.

Sikhs practice worshipping an omnipresent divine power. They rather venerate their Gurus, various milestones achieved by the gurus and their teachings. Some of the Hindu festivals like Diwali are also celebrated by the Sikhs but with a completely different reason and philosophy.

Sikhs worship Guru Granth Sahib Ji - a holy scripture for the Sikhs, which was compiled by their first Guru Nanak Sahib ji. His successors further edited and added on into the holy book. Devotees even circumambulate this Holy Scripture and bow their heads in devotion before it. Various festivals celebrated in Sikhism are celebrated by taking the scripture out in public processions.

Sikh festivals mainly encompass the birth days of their ten gurus. The birthday of gurus is celebrated with an unmatched vigor and Guru Granth Sahib Ji, the scripture is taken out from gurudwaras on a decorated palanquin and public processions follow it. Fireworks, distribution of sweets as Prasad and feasts at the gurudwara are all an inseparable part of these festivities. Music is considered to be the strongest medium to connect with the Supreme in Sikhism hence playing of gurbani (musical reading of the scripture); hearty dances and their martial arts display treat the eyes of viewers during the festivals.

Some of the most important Sikh festivals include birthday celebration of their first Guru Sri Guru Nank Dev Ji, his successors' birth days, Hola Mohalla, Baisakhi and Deepawali. Hola Mohalla can be equaled to an Olympics event. It is celebrated in the month of March and may co-incidentally fall on the day of Sikh New Year even. It is a week long event where Sikhs camp out and enjoy public display of their bravery and prowess. These displays are further followed by musical kirtans. Another quite interesting aspect of the festivals is that the entire Sikh sangat partaking in the festivities eats in parallel queues, also known as pangats. Vegetarian meal only is served in such feasts. On the concluding day of this festival, a military like long procession is taken out. Baisakhi is another major Sikh festival that commemorates the foundation of Khalsa panth. It is therefore celebrated with unmatched enthusiasm. Devotees flock the birthplace of their Khalsa philosophy, that is, Anandpur Sahib gurudwara. Other main places of worship including Golden temple in Amritsar and Gurudwara Sri Bangla Sahib Ji in Delhi also celebrate Baisakhi with great fanfare.

Know more on famous Sikh holidays and festivals celebrated by Sikhs and Punjabis all over India and worldwide.


** In order to commemorate 400th birth anniversary celebrations of Sri Guru Tegh Bahadur, there are nation wide celebrations planned by Government of India. But with Covid Crisis, these celebrations are likely to be affected going by protocols directed by Ministry of Health in India.


* According to (Nanakshahi calendar)