Geography of India is very rich in landscape, rivers and mountains. Read further for geographical regions of India. 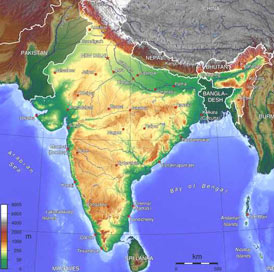 Based on the climatic changes, the geographical regions of India are divided into the following major parts:

Northern Plains
Known for the extreme type of climate, the northern plains of India are stretched from Assam in the east to the Punjab in the west going on to the Rann of Kutch in Gujarat. Also known as the Gangetic Plains, this region has some of the largest Indian rivers meandering through it like Ganges, Brahmaputra, and the Yamuna. These plains experience a relatively hot and humid summer followed by a freezing cold winter. These plains receive profuse rainfall during July to September. But winter still is considered to be the best time of the year in this region for the maximum number of tourists flock the region during that time.

Western Himalayas
The Himalayas are the second most important climatic regions of India for most of the environmental changes in India owe their frequency and vibrancy to it. Summer is the best season to visit the region as the massive rainfall in winters makes the place impossible to reach. It is due to Himalayas only that the excessively cold and chilly winter breezes rising from the western oceans cannot reach the country.

Central India
This region of the country observes maximum heat during summer season. The month of July remains the much awaited month in the region for a heavy rainfall is brought by the monsoon then. The winter months in the central regions of India observe contrasting climate changes for the temperature usually drops in the night.

Western India
An extremely hot temperature is experienced in the western parts of India and then the monsoon comes as a relief in the months of June and September. The winter months are somewhat relieving to this part of the country with a temperate climate.