The Ganges River Dolphin, originally discovered in 1801, is the National aquatic animal of India. The Central Government of India declared this on the 18th of May 2010 officially. The National Ganga River Basin Authority is an ambitious project of the Government that aims to reclaim the lost glory of the Ganga River. The Government is planning to spend a whopping Rs 15000 crores on this project.

The decision to declare the Ganges River Dolphin as the National Aquatic Animal was taken to preserve the rare species as its numbers are declining rapidly. Only a few thousand Dolphins are left at this point. The river Dolphin can be found in the Ganges and Brahmaputra River. The rivers begin in the Himalayas and extend to Bangladesh, covering Nepal and Bhutan in their course. 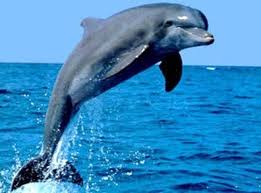 The Ganges River Dolphin is a beautiful aquatic animal that weighs around 100-150 kg when it is fully grown. Females are generally bigger than male Dolphins. They use ultrasonic waves to identify the prey and move around the river as they are blind. However, the Dolphins can get a clear image of the objects with the ultrasonic waves.

These animals prefer freshwaters, and the point where two or more rivers meet is the ideal settlement for Dolphins. The unique thing about these Dolphins is that they do not breed in captivity, and they need to be out in the open waters. It is generally believed that rivers are clean and healthy when there are more Dolphins.

Yet another interesting point about these animals is that they cannot breathe in the water, and they come to the surface of the water every 30 to 40 seconds to catch their breath. This is why we often see Dolphins springing out of the water in rivers and oceans.

It is not common to see them in groups as they usually stay alone or in a small group. Usually, baby Dolphins live with their mothers for a long time. The Dolphins have an unusual breeding habit, and they only give birth to a single calf in every delivery. Generally, these animals breed only once in two to three years.

The species are endangered due to pollution and indiscriminate use of pesticides around the Ganges River. Apart from that, the construction of too many dams has obstructed the flow of water in several areas, creating a lack of breeding space for the Dolphins. Not only that, poaching is also a severe threat to these animals as their meat and oil derived from the animals fetch a lot of money in the black market. In some cases, there are accidental deaths of these animals as they get caught in the fishing nets used by local fishermen.

The animal now joins the list of endangered species under the IUCN Red List. Apart from that, the animals now come under the Wildlife Protection Act 1972, and they cannot be hunted in India. The WWF India has also started a Conservation Programme as the species are slowly declining in numbers.