Tigers in India have at last found protection under the 'Project Tiger' and are now in a comfortable and safe position. These ferocious feline species has the glory of being the National Animal of India. 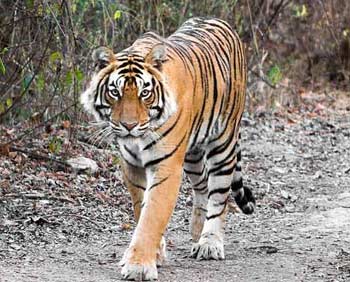 National Animal of India - Tiger - Panthera tigris (Linnaeus) or the Tiger has been known long for his royal grace, strength, agility and enormous majesty and power. India hosts more than half the population of the tigers in the entire world and there are eight native species of tigers found in India. Especially the Royal Bengal Tiger can be seen in all the regions of India and its neighboring countries such as Nepal, Bhutan and Bangladesh, except the north-western Indian region. Due to the dwindling numbers of the tigers who enjoy one of the topmost positions of the food chain, the royal sport of game hunting was banned by the Indian government. In April 1973, 'Project Tiger' was launched to provide protection to this National Animal of India.

The tiger impersonates strength with agility, speed, shrewdness and intelligence. Till now, 23 tiger reserves have been established in the country. This carnivorous feline of Asia is large and mane less. Its yellow colored fur with black transverse stripes and white belly look quite magnificent. It has now become a symbol of the India's efforts of conserving its wildlife heritage. The rare white tigers are also found in India, especially in the Gir forests of Gujarat. Tigers of Sunderbans and the Himalayan regions are larger in size than those of Madhya Pradesh and South India and can also be seen thriving in the evergreen forests. Most tigers have a lifespan of 20 years and can lean an amphibious life. They are known to hunt almost all the animals of the jungles, even the mighty elephants.