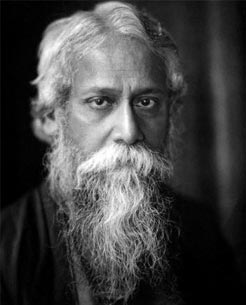 National Anthem - Jana Gana Mana - Rabindranath Tagore, the famous Noble laureate and Indian poet penned the five stanzas of the song titled 'Jana-gana-mana'. It was first sung in the session of Indian National Congress in the yet-not-free India in Calcutta on 27th December 1911. Much later, the Constituent Assembly of India adopted the first stanza of this song as the National Anthem of India on 24th January 1950. We have given the song below along with the line-by-line translation of the song:

Jana-gana-mana-adhinayaka, jaya he
(Thou art the ruler of the minds of all people, victory to thee)
Bharata-bhagya-vidhata.
(Dispenser of India's destiny.)
Punjaba-Sindhu-Gujarata-Maratha
(Thy name rouses the hearts of Punjab, Sind, Gujarat and Maratha,)
Dravida-Utkala-Banga
(Of the Dravida and Orissa and Bengal;)
Vindhya-Himachala-Yamuna-Ganga
(It echoes in the hills of the Vindyas and Himalayas,)
Uchchala-Jaladhi-taranga.
(Mingles in the music of Jamuna and Ganges and is)
Tava shubha name jage, 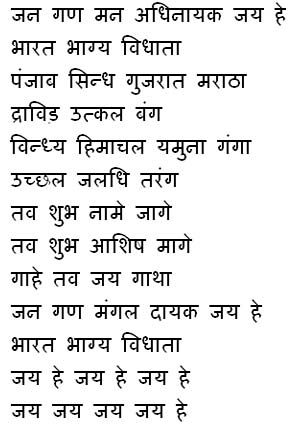 The full version of the National Anthem takes about 52 seconds to play. On certain occasions, a shorter version of the song consisting of the first and last lines of the stanza is played that takes around 20 seconds. Written originally in Benagali by Tagore, it was later translated to Hindi. Every Indian child is made to learn the National Anthem in schools and it is considered a patriotic duty to stand erect whenever its music is played, as a mark of respect to the country.