The Lion Capital erected by Emperor Ashoka at Sarnath is the National Emblem of India. This Ashokan State Emblem is used only for government official purposes and commands every ounce of respect. 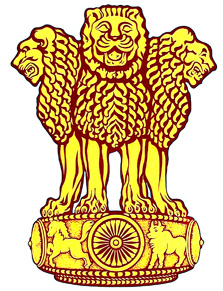 National Emblem of India - An Ashokan pillar at Sarnath near Varanasi in Uttar Pradesh depicts four lions on the top standing back to back. Its base has an elephant, a horse, a bull and a lion separated by intervening wheels over a bell-shaped lotus and a Dharma Chakra or the Wheel of Law carved on it. This symbol was adopted as the National Emblem of India by the Indian Government on 26th January 1950. The two-dimensional picture of this emblem has become the official symbol of the government now that only shows three of the four lions and the base having the Dharma Chakra in the center and a bull and horse on either side and an engraved phase that reads 'Satyameva Jayate' in the Devanagari script. The phrase is translated to mean 'Truth alone triumphs'.

Ashoka was a great Mauryan King who was known far and wide for converting to Buddhism after seeing the after effects of the war imposed by him on the small states surrounding him, especially on Kalinga. He was said to be full of remorse seeing the ill effects his ambition had brought on the soldiers and families from both the sides. His emblem has now become the official seal of the President of India and Central and State Governments of the Indian union. Ashoka erected the Lion Capital in the 3rd century BC to mark the spot where Buddha first proclaimed his gospel of peace. Now, it is symbolic of India's commitment to world peace and goodwill. The three lions visible in the emblem symbolize power, courage and confidence. This State emblem is used only for official purposes and commands utmost respect and loyalty.