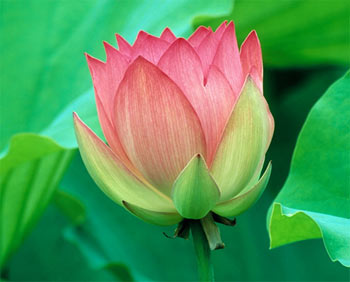 National Flower of India - Lotus - The glory of being the National Flower of India goes to 'Lotus' or the water lily, an aquatic plant of Nymphaea family. The big attractive pink flowers have symmetrically arranged petals and broad floating that impart the sense of serenity and beauty. They are considered quite sacred by the Hindus, a major section of the Indian population and are thus have many legends, religious mythology and folklores surrounding them. It is said to represent long life, honor, good fortune and triumph. Lotus can live both in fresh shallow waters and in muddy swamps and can re-germinate for thousands of years symbolizing survival and purity of heart, mind and soul in all conditions.

Lotus is often depicted as the seat of Gods and is often used by worshipping and religious practices. Its long stems contain air spaces while rhizomes perform the functions of the roots. The metaphorical symbolism of Lotus extends to divinity, fertility, wealth, knowledge and enlightenment. The adaptability of the plant to produce beautiful and gorgeous flowers despite the muddy swaps where it goes are meant to remind to remain pure and untouched by the evil and lead a life of non-attachment. The eyes of Lord Vishnu are often described in the Vedic verses as the petals of the Lotus flower and His pink feet are referred to as 'Charan Kamal' or the 'Lotus Feet'. It is often used as the motifs and patterns in the ancient Indian art and architecture.