Banyan Tree symbolizes immortality and survival and has thus been chosen as the National Tree of India. This Indian Fig Tree spreads to miles of area by itself and can go on living for thousands of years. 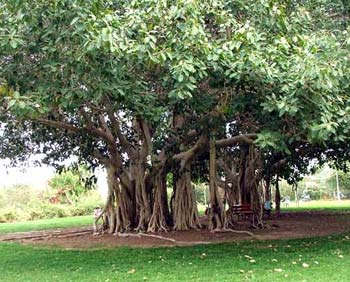 National Tree of India - Banyan - Ficus bengalensis or the Banyan tree is the National Tree of India. Belonging to the fig family, the branches of the Banyan spread over a large area take roots and keep on living and regenerating for thousands of years. Over the years, it consistently gains more trunks and branches that add to its longevity. According to the Indian mythology, it is considered immortal. Many of the Indian villages are centered around large shady banyan trees that provide a good place for public meetings and meetings of the village council. The tree has the widest reaching roots of all the trees and can easily extend to several of acres.

The size of the banyan tree, its alleged immortality and its religious significance in India made in an obvious choice to be chosen as the National Tree of India. It served to provide leafy shelter to a number of weary Indians who would use it to give themselves some rest in its shade from the blazing hot summer sun. Indians have long honored this tree and many folklores and mythological legends are attached to it. Some of the Hindu rituals make it even more prominent. Besides the humans, it provides shelter to many other creatures. It is also known to need little maintenance and is virtually a boon to Indians.