This article offers information on current population of Amritsar city which is 1,329,681 (1.3 million) in 2021. Explore more on facts, growth and history of Population in Amritsar.

Growth of Population in Amritsar
Just like other cities of India, Amritsar too witnessed a descent growth in its population. According to 2001 Population census of India, the city population was recorded at 966,862. Population growth in Amritsar is also supported by increase in tourism activities in the city. The Golden Temple is visited by people from far and wide in large number thus encouraging business and property developers in Amritsar to invest heavily. This further led to migration of people from various districts of the state in search of employment and better standard of living. 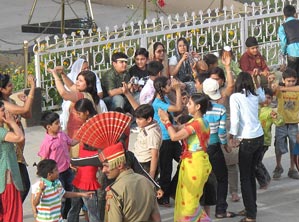 Population by Religion in Amritsar
Sikhism and Hinduism are the main religions followed in Amritsar. The people of various religion and caste celebrate all the fairs and festivals in Amritsar with great zeal and enthusiasm. Punjabi is the main spoken language in Amritsar while Hindi and English are also widely spoken by the locals.

What is the Population of Amritsar
Located closed to India - Pakistan border, the golden city of Amritsar is home to over 1,329,681 (1.3 million) people in Punjab. Majority of the population in Amritsar follows Sikh religion.