The current Population of Chennai city is estimated to be over 9.7 million. Get details on Population, sex ratio and literacy rate in Chennai, India.

Current Population of Chennai - Chennai with current population of 9,722,974 (9.7 million) is one of the largest cities of South India. The Population density of Chennai is 26,903, which is currently largest in the state of Tamil Nadu. Chennai has witnessed a tremendous growth in its manufacturing, retail, health care and IT sector in the last 10 years. It is regarded as India's fourth largest city after Delhi, Mumbai and Kolkata. Being a major business hub of the state, Chennai has witnessed a rapid growth in its Population. Chennai has become an important destination for trade and tourism in recent years. It has evoked as a city with tremendous potential for industrial growth because of its economic viability and available infrastructure. The state government departments are geared towards increasing trade and commerce links with other countries and developing greater industrial growth. This entire boom in the trade and business of Chennai city accounts largely for its rapidly growing population. More business and job opportunities in the city lure people from in and around Chennai to come and settle here. Major multinationals have already set up there branch offices in Chennai leading to more people being hired by this companies. So Population of Chennai has grown rapidly in the last 20 years due to its major industrialization and tremendous growth. 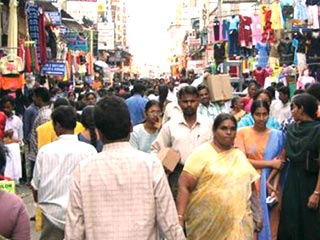 Current Population of Chennai in 2021
In current year, Population of Chennai is estimated to be 9,722,974. Chennai urban agglomeration with a total popultion of 11,981,478 (1.1 crore) is regarded as one of the most populaous areas of South India. The same figure was recorded to be 11,527,816 in 2020 with a city population of 9.4 million. According to UN Mega Cities 2016 report, Chennai is ranked at No. 30 in most populous urban agglomeration in the world.

What is the Population of Chennai
The vibrant city of Chennai is currently home to over 9.7 million people. Its metropolitan area is 4th largest in India with a population of over 11.9 million. As of 2011, Chennai Metropolitan Area Includes Chennai district, Alandur, Chengalpattu, Kanchipuram, Sholinganallur, Sriperumbudur and Tambaram taluks of Kanchipuram district and Ambattur, Gummidipoondi, Madhavaram, Ponneri, Poonamallee and Tiruvallur taluks of Tiruvallur district. The total count of people living in this area is 11,527,816.

Growth of Population in Chennai
According to 2001 census, Population of Chennai was 4.2 million (4,216,268). The population density in the city was 24,682 per km, making it one of the most densely populated cities in the world. Chennai recorded a descent sex ratio of 951 females per 1000 males in the 2001 census which currently stands at 986. Also Literacy rate in the City has improved a lot as compared to last census. Average literacy rate in the city is also very higher at 80.14% as compared to overall literacy rate of India which is only 64.5%. Chennai is rated at fourth position in terms of slum population of India. The city is home to 820,000 slum people (Census 2001) living in slum conditions.

* Figures provided by Census of India