According to Census of India 2011, Population of India is growing at a very rapid rate. Read further for Indian Population growth rate, history, and other details.

Population of India - As per the latest survey carried out on March, 2011, the total population of India was recorded to be 1,210,193,422 persons thus making it the second largest populated country in the world. India follows China in this race of population, the former being at number one.

In July 2007, this mark had increased by a considerable number and the last recorded data had the figure of 1,129,866,154, under the Indian Population head.

In terms of the population dynamics, India is very strange for it supports a total of 15% of the global population at a mere 2.4% of the world's land area. The country has about 70% of its population residing in rural areas centered in about 550,000 villages. 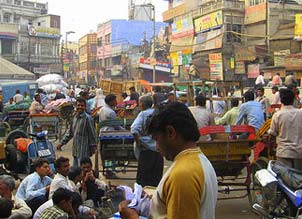 But one of the most remarkable things about Indians is that they have retained their traditions and values irrespective of the attacks of various invaders that have no doubt left indelible prints on the land. A rare unity in diversity is what one can observe in this diverse country with 18 official languages.

An incredible racial and cultural fusion of religion, caste and language is what can be observed in India. The only country with almost 79.8% of the Hindus and about 180 million Muslims, India is also home to a considerable chunk of Christians, Sikhs, Jains, Buddhists, and Parsis also. The nation has preserved it rich culture and traditions which are vastly displayed in the day to day life of the Indians. Also, home to a wide variety of languages, Hindi is widely spoken all over India.

Most Populated Cities in India