Current Population of Jaipur - Jaipur is better known for its tourist places, marble statue and cultural celebrations. Jaipur is the largest city and an gateway to other tourist destinations in Rajasthan. The city is an important part of India's tourism industry and is the most Populated metropolitan area in the state of Rajasthan. The city is witnessing business growth and rapid real estate development. All these factors contribute heavily to the over population of Jaipur. People from villages, towns and other cities forms a decent proportion of population in Jaipur. A large proportion of these migrated population are engaged in tourism, education, and manufacturing industry. These migrants represent a large number of Jaipur's current population. A large number of people visit Jaipur for studies as there are very reputed universities and colleges in Jaipur.

Jaipur is witnessing a rapid growth in its trade and manufacturing industries. The Pink city is attracting investment opportunities from all over India. In year 2010, the state Government had started Jaipur Metro Rail Project to provide world class transport system for the city. Like other major metros of India, Big International companies and manufacturing units are eyeing Jaipur as another hub for their growth in India. All these factors contribute a lot towards providing better employment opportunities for growing population of Pink city. 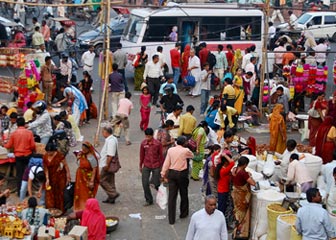 Growth of Population in Jaipur
The Population growth in the capital city of Jaipur has increased more than 10 times in the last 50 years. In 1900, the population of Jaipur was only 160,000. In 2001, Jaipur Municipal Corporation had an population of 23,22,575.

What is the Population Jaipur (Pink city)
According to projected figures from Census of India, Population of Jaipur city in 2021 is 4,067,826 (4.06 million).

Population of Jaipur (2011 - 2021)
According to last Census of India held in year 2011, Population of Jaipur was 3,046,163. These include 1,619,280 males and 1,454,070 females living in the most populated city of Rajasthan. Also data highlighted in Census report signalled a annual growth of 3% in population. Jaipur city is an important hub for trade, commerce and tourism in Rajasthan. Its population projection shown here are calculated using geometric increase. Explore a year on year growth of Population in Jaipur city from 2011 to 2031.

* Figures provided by Census of India