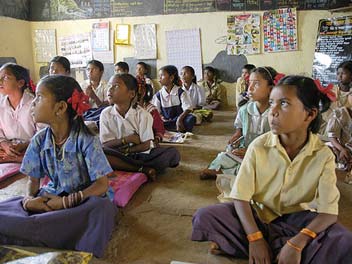 Literacy Rate of India 2021 - To know development in a society, Literacy is another proper indicator of economic development. For purpose of census, a person in age limit of seven and above, who can both write and read with understanding in any of the language is considered as a literate in India. Literacy plays a major role in the economic development of a nation. Although India has raised its current literacy rate of 74.04% (2021) from 12% at the time of Independence in 1947, its still lag behind the world average literacy rate of 84%. Compared with other nations, Republic of India has the largest illiterate population.

State with highest Literacy Rate
The southern state of Kerala has the highest literacy rate of 93.91% in India.

Most literate Union Territory
Lakshadweep with a literacy rate of 91.85% is the most literate union territory in India.

Least literate Union Territory
Jammu and Kashmir with a literacy rate of 68.74% is the least literate union territory in India.

Government of India has taken several measures to improve the literacy rate in villages and towns of India. State Governments has been directed to ensure and improve literacy rate in districts and villages where people are very poor. There has been a good improvement in literacy rate of India in last 10 years but there is still a long way to go. Going by previous growth rate, India will be able to achieve its universal literate target not before 2060.

List of Steps taken by Government of India to improve Literacy Rate in India: