Madhya Pradesh with a current population of 8.7 crore (2021) is the fifth-largest state in India. Know more on sex ratio, literacy rate and total population in Madhya Pradesh.

The majority of Population is Hindu while Muslims making up the largest minority community. The tribes of Madhya Pradesh constitute over 20% of the state population and are mainly concentrated in southern part of the state. The lifestyle, culture and customs of this community mostly resemble the Hindu religion though they still strongly believe in orthodox traditions.

Gond is the best known tribe and forms the largest group in Madhya Pradesh. They mainly in habitat areas on both sides of the Narmada in the Mandla, Chhindwara, Betul and Seoni regions and the hilly terrains of the Vindhya and the Satpura region. Agaria, Pradan, Ojhan, Solahas are the descendent tribal groups originating from Gonds, with two sub castes - Rajgond and Datoliya. Bhils, the second largest tribe are largely concentrated in the area around Jhabua, Dhar and Ratlam. 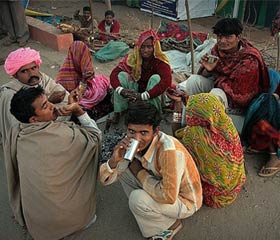 Hindi is the official language of Madhya Pradesh also most widely spoken language. It is the predominant language of the official work. For a fair amount of people in the major towns and cities and for the business class, English is their second language. Malwi, Bundeli, Bagheli, Nimari are the commonly spoken regional languages.