Current Population of Rajasthan state is estimated to be 80,782,495 (8 crores). Get details on population growth, sex ratio and literacy rate in Rajasthan.

Population of Rajasthan - Rajasthan with a population of 80,782,495 people is ranked as 7th populous state of India. Nearly ninety percent of Rajasthan's population is Hindu with Muslims making up the largest minority with eight percent of the populations. Jains - the merchant and traders from Rajasthan constitute a significant presence. Schedule Castes (ST) and Schedule Tribes (ST) form about seventy percent and twelve percent of the state population respectively. The population of the tribes in Rajasthan is nearly a double of the national average, with original inhabitants Bhils and the Meenas forming the largest group. Lesser known tribes like Sahariyas, Damariyas, Garasias, Lohars still form an important groups.

The Bhils are largely concentrated in the area around Chittorgarh, Udaipur and Dungarpur in the south corner of the state constituting a formidable 39 percent of the state's tribal population. Regarded as warriors with fine inherent guerilla tactics, their archery skills find mention in the Hindu epics of Mahabharata and the Ramayana. With improved communication and rapid growth in the economy, the Bhil's of living is slowly changing from their original hunting and gathering existence to one near the mainstream. 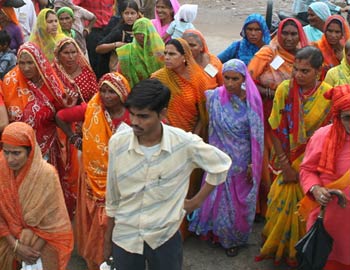 After the Bhils the Meenas are the second largest tribal group and the most widely spread throughout eastern Rajasthan. Most Meenas are cultivators and worship Lord Shiva. Another nomadic community is Rabari or Raika, of which there are two groups - Camel breeders (Marus) and the sheep breeders (Chakias). The Gurjars in the eastern part of the Rajasthan including Jaipur, Alwar, Bharatpur and Kota region dominate.

Sex Ratio of Rajasthan
The sex ratio in Rajasthan is not a great indicator of its overall growth and development. Present sex ratio of 926 females for 1000 males is less as compared to other states in India like Kerala and Karnataka. According to latest figures, there are only 10 districts in Rajasthan where sex ratio exceeds 900. In fact Rajasthan's sex ratio has declined in the last two decades which causes a serious concern for Government and Agencies.

Most Populated Cities in Rajasthan
Jaipur, Jodhpur and Kota are three most populated cities of Rajasthan. As of 2021 projected population, here are more details below: