Check out profile and biography of famous Indian Athlete Anju Bobby George. Anju bobby George is regarded as one of the best women athlete in India. 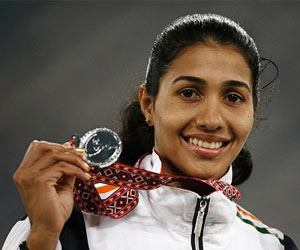 Anju Bobby George - It's after a very long time that an athlete capable of winning medals at the international level has come up on the Indian sports horizon. And she is none other than Anju Bobby George. Anju jumped to fame by winning the bronze medal in long jump at the World Athletics Championships, 2003 in Paris.

Achievements and Accolades
With her bronze winning performance at the world athletics Championship 2003 in Paris, Anju Bobby George catapulted herself to fame and won the Rajiv Gandhi Khel Ratna award in 2004. Even before winning the bronze at the Paris meet, Anju had shown a lot of promise by winning the gold at the junior Asian Championship in1996. Although she started with Heptathlon, but later began to concentrate on her jump events and went on to win long jump medal at the junior Asian championship. She also won the silver medal at the SAF games in Nepal. Anju became the first Indian woman to win a bronze medal clearing 6.49 m at the Commonwealth Games at Manchester 2002. She also won the gold medal at the Busan Asian Games. Anju received the prestigious Arjuna award (2003) for eminent sports persons from the government of India after her success in the World Athletic meet.

Turning Point
Anju showcased her talent in the national schools games where she won third place in 100 m hurdles and 4x100 m relay and later she became the Calicut University Champion during her college days. But the real turning point in Anju's life came when she was married to her athlete husband, Bobby George.

Early Promise
Since her childhood, Anju showed great promise. She was initiated into athletics by her father and her interest was further deepened by her trainer Mr. Thomas in Koruthode School. In the School Athletic meet in 1991-92, she came first in 100 m hurdles and relay and second in long jump and high jump events and became the women's champion. Anju's talent was noticed in the national schools games where she won third place in 100 m hurdles and 4x100 m relay. 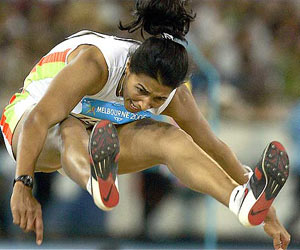 Ups And Downs
Anju has been consistently performing ever since her arrival on the athletic scenario of India. Her bronze winning effort at the World Athletics Championship 2003, Paris has been the zenith of her carrier. This win at the world championship coincided with the upcoming Athens Olympic Games and all the countrymen suddenly started nurturing the hope of a medal at the Olympic Games. She was tipped to be one among the top three but that was not to be and the hopes of 100 million people were dashed to the ground. Although Anju could not win any medal at the Olympics but she tried hard and improved her own record.