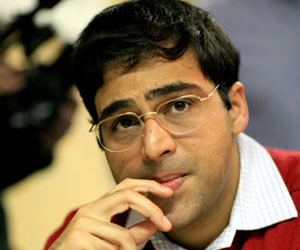 Achievements And Accolades
Vishwanathan Anand was the youngest Asian to win the International Master's Title at the age of fifteen. At sixteen he became the National Chess Champion; at eighteen India's First Grandmaster. In 1987, Vishy Anand became the first Asian to win the World Junior Chess Championship. In 1992, he won the formidable Reggio Emilia Tournament. Anand was the runner up to Kasparov in World Championship final in 1995. He defeated Kasparov in the rapid chess tournament in September 1996 and Karpov in June1997 in Hamburg Rapid Chess tournament.

Turning Point
Although Vishwanathan Anand had shown a lot of promise from an early age but the real turning point in his carrier came when he won the National Junior championship at the age of fourteen in the year 1983. After this title there was no looking back for the chess maestro as he went on to conquer one player after another.

Early Promise
Anand had a sharp memory from the very beginning and was initiated into chess at an early age of 5 by his mother, Susheela. From the very outset he was taken to the Mikhal Tal Chess Club, Chennai. Anand had the advantage of being in Chennai as it had a flourishing chess culture due to the presence of chess champions like Manuel Aaron and Ravi Kumar. The Mikhal Chess club had become the hub of chess lovers and Anand spent as much spare time as possible.

In the club, one board would be placed in the middle of the room, and two players would sit across the table. The winner would remain seated on his seat while the looser would make way for the next comer. Interestingly, Anand would sit for the first game and end up playing throughout the day, sending off one player after another. 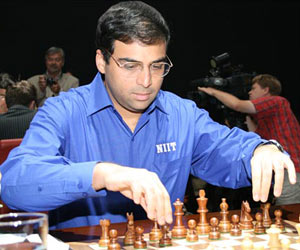 Vishwanathan Anand Biography
Viswanathan Anand was born in Chennai on December 11, 1969. His father served as a high official in the south Indian Railways while his mother, Susheela is a housewife. She was a chess lover and initiated Anand into the game at the age of 5. As mentioned earlier, Anand had shown a lot of promise from the very outset and slowly and gradually he went on to win a number of tournaments at a very young age. Anand got his B.Com degree from the Loyola College, Chennai.

Anand is married to Aruna, who supports him in preparation for his tournaments. Anand was awarded the British Chess Federation book of the Year award in 1998 for his book, "My Best Games of Chess". Anand's other hobbies are reading, swimming and listening to music. Anand is known as the "One man Indian Chess revolution," enthusiastically promotes the game, through innovative methods in India. Viswanathan Anand presently lives in Collado Mediano in Spain with his wife Aruna.

Ups And Downs
Vishwananthan Anand's chess carrier has mostly been on the upswing ever since he started playing chess. Like all other sportsmen, Anand too had to go under some lean patches in his chess carrier. Though Anand had won the world junior Championship way back in 1987 but it took long 13 years for Anand to actualize the early promise he had made by winning the world junior title. But Anand was not an exception to it. In fact, the former world Champions Boris Spassky and Gary Kasparov also took almost the same time to achieve the world crown after winning their world junior title.