Information on famous Indian Cricketers and there achievemenets are presented below.

Famous Indian Cricketers - Indian Cricket Players are known world for their achievements. India has produced several great cricketing legends who have contributed immensely by setting personal milestones in history of cricket. Indian Cricketers have several awards from foreign cricket boards, universities and association for their great achievements. The greatness of Sachin Tendulkar has been highlighted by Sir Don Bradman himself. Others who have also made India proud are Sunil Gavaskar, Kapil Dev, Virender Sehwag, Anil Kumble amd many others. Here we have presented below a brief profile and biography of some of the best cricketing legends of India.

Kapil Dev - Kapil Dev Although cricket became popular during the British raj but it was largely because of two players that the game became a household name in India in 80's. These two were Sunil Gavaskar and Kapil Dev. Kapil indeed ruled the minds and hearts of an entire generation in the 1980s and the one that followed.

Sachin Tendulkar - Sachin Tendulkar a boy of 16 walks in to bat against the fiery attack of Waqar Younis and Wasim Akram and is hit on the head, even then this little boy goes on to make half century. This boy was none other than the phenomenal Sachin Tendulkar. Sachin Tendulkar, the very name that strikes terror in the hearts of the bowlers all over the world, is regarded as the most accomplished batsman of modern day cricket. 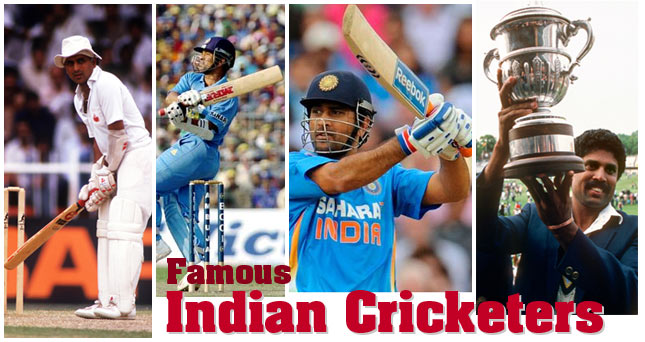