Kapil Dev is regarded as one of the greatest cricket players of India. Through this biography we trace the life, profile and carrier of Kapil Dev. 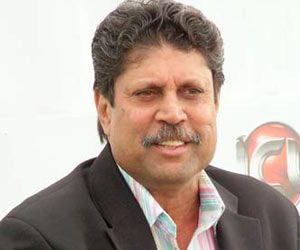 Kapil Dev - Kapil Dev Although cricket became popular during the British raj but it was largely because of two players that the game became a household name in India in 80's. These two were Sunil Gavaskar and Kapil Dev. Kapil indeed ruled the minds and hearts of an entire generation in the 1980s and the one that followed. Till the rise of Kapil Dev, India was known for deadly spinners and his emergence coincided with the decline of the famous spin quartet of Bedi, Prasanna, Chandrasekhar and S. Venkataraghavan

Kapil Dev was the greatest pace bowler India has produced, and their greatest fast-bowling all rounder. Such was the charisma and stamina of this man that at one point of time he became the highest wicket taker in test and one day cricket. Along with Imran Khan, Ian Botham and Richard Hadlee, Kapil Dev was considered the greatest all rounder of his times.

Achievements And Accolades
Kapil Dev, the man who remained India's main strike bowler for almost 15 years, needs no introduction. On many occasions he single-handedly won matches for India and easily became the most popular pin-up boy of the country. For an Indian fast bowler, taking 434 wickets in test cricket is indeed a great achievement. When Kapil was just 20, he set a new record of scoring 1000 runs and taking 100 wickets. He made this record within a period of one year and 109 days only.

Kapil Dev was the man who marshaled his boys to the most famous victory in Indian Cricket- the cricket world cup of 1983. Not only did he jelled the team together but also played the most memorable knock, in the history of the world cup cricket, against Zimbabwe. Kapil came to bat when India were almost out of the match at 17/5. And then he played like God and robbed the match from the opposition. He was rightly named the Wisden International Cricketer of the Year in 1983.

As skipper of the Indian team he did a decent job and led the team to series victory against England in 1986. Throughout his cricketing carrier Kapil Dev contributed to the cause of the team with both bat and the ball and saved the team from impossible situations. One such occasion was when Kapil hit 4 consecutive sixes off the bowling of Eddie Hemmings (England) in 1990 to save India from follow on. Kapil Dev's super human match winning effort with the ball in the Melbourne Test of 1980 against Australia, in which he bowled non stop for 3 hours to bowl out Australia after taking painkilling injections for a worn out hamstring and a pulled groin muscle, is still remembered with awe and respect. 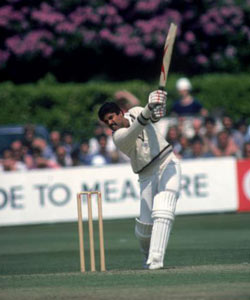 Kapil remained away from the game for some time after retirement and took to golfing and later became the coach of the Indian Cricket team in 1999. As a mark of respect for his contribution to the Indian cricket, the Indian government honored him with the 'Padmabhushan' award. It was not a surprise when Kapil was chosen the Indian cricketer of the century by Wisden, beating the likes of the great Sunil Gavaskar and the batting genius, Sachin Tendulkar.

Turning Point
Kapil was a regular visitor to the inter-sector cricket matches in Chandigarh. It happened so that one Sunday the Sector 16 team fell short of one player, Kapil, as usual, was there to watch the match and was taken in as a replacement. The sector 16 cricket team had 3 players who had played Ranji Trophy cricket for Haryana. They were impressed by the young boy's attitude and talent and Kapil became a regular member of the side.

Early Promise
Kapil's passion for the game was noticed by his family and they encouraged him to take up the game seriously. Kapil was hardly 14 when he started playing for the DAV school. He started his cricketing lessons under the guidance of Desh Prem Azad. At the age of 15, Kapil Dev was invited to attend a live-in coaching camp in Bombay, which was conducted by Hemu Adhikari, an ex India test cricketer.

Kapil Dev made his first class debut in November 1975 at the age of 17, against the Punjab. He returned with a splendid performance taking 6 wickets for just 39 runs. There was no looking back after that as one splendid performance followed another. In his next few matches, Kapil destroyed the opposition (Jammu and Kashmir, Bengal and Services) with his lethal deliveries. This marked the arrival of one of the greatest cricketers of India and the day was not far off when Kapil would make it to the Indian team. That special day came in 1978, at Faisalabad, against Pakistan. He could not make big impression but this series saw the emergence of Kapil Dev as a talented fast bowler and all rounder.

Ups And Downs
While playing for India Kapil always gave his best both with bat and ball. Kapil never let the controversies affect his game. There was hardly any time when this all rounder was not in his silky touch but Kapil's life was marred by controversies after his retirement from international cricket. The match fixing controversy, which rocked the world cricket, engulfed Kapil Dev as well and it looked that all his efforts and contributions to the Indian cricket were washed away in this tide, which gad taken a heavy toll.

Kapil was, however, given a clean chit by the CBI and the Indian Cricket Board. Vivian Richards, who presented the Indian cricketer of the century award to Kapil, was one of those persons who never believed that Kapil could be involved in any thing other than cricket.