Through this article sneak a look into the biography and profile of Dhanraj Pillai, former Indian hockey player and one of the best sportsmen of India. 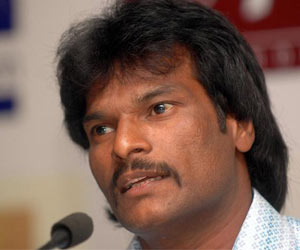 Dhanraj Pillai - The mercurial Dhanraj Pillai is easily one of the best forwards of hockey in the world. Dhanraj is a colorful and charismatic player. His magic is timeless and he can pierce through any defence, any time. His dribbling is so fast that he can go past players even 10 years younger to him. Most important of all, Dhanraj still has that passion, hunger and love for the game. Such is the charisma of this man from Pune that his fan following cuts across even borders.

Achievements And Accolades
Coming from a very humble background, Dhanraj has proved that determination, hard work and potential can achieve you the desired. In his carrier of more than 15 years, Dhanraj has won many national and international awards for his brilliant performance. He is the recipient of the Arjuna Puraskar (1995) and the K.K. Birla Award (1998-99) for excellence in Sports. He has also received the Rajiv Gandhi Khel Ratna award (1999) and the Padma Shri (2000). Dhanraj was the only Indian player to figure in the World Eleven side during the 1994 World Cup at Sydney.

Dhanraj Pillai is the only Indian to have played in 3 Olympics, 3 World Cups and 4 Asian Games. Playing for Mahindra & Mahindra in the domestic circuit, he was chosen the Man of the Final in the Murugappa Gold Cup in 1999. He has also played for foreign clubs like the Indian Gymkhana (London), FC Lyon (France), Selangor (Kuala Lumpur), Abhahani Limited (Dhaka) and Stuttgart Kickers (Stuttgart). His dream is to be part of an Olympic Gold medal winning team.

Early Promise
Though he was born in a poor family, Dhanraj still received a lot of support from his family members. This was because they could see the potential in the young boy who did wonders with broken hockey sticks. Dhanraj had an inspiration in the form of his brother Ramesh Pillai. His passion for the game is evident from the fact that he played by piecing together broken hockey sticks!

Turning Point
Though Dhanraj had shown a lot of promise from his early childhood, the real breakthrough in his hockey carrier came when he was selected to the Kirkee hockey school, near Pune. After that there was no looking back for this mercurial and shining star of Indian hockey. 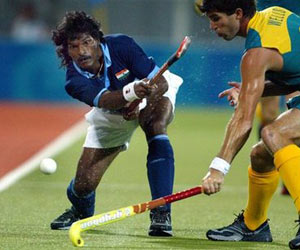 Dhanraj Pillai Biography
Dhanraj Pillai was born in Kirkee, near Pune, Maharashtra on 16th July, 1968. His is the story of a poor boy making it big in the world of hockey, from the narrow and muddy streets of Kirkee. Pillai's career has been marked by a constant struggle against all odds; the signs were evident early on in his life. Born in a poor family, Dhanraj had a tough life in the gallis (streets) around the neighborhood armaments factory in Pune. Dhanraj was the youngest of his five brothers and the family had not enough bucks to buy hockey sticks.

Despite these odds Dhanraj received a lot of support and encouragement from his family, in general and his mother, in particular. From early childhood Dhanraj has been a fighter to core. On many occasions he had earned the wrath of hockey officials by speaking against their high handedness, maladministration and arbitrary decisions. He had to pay heavy price for it. He has been dropped by the team management on several occasions without any reason. Presently Dhanraj has started a hockey academy in Mumbai to train children and youths, particularly from humble background.