This write up contains a short biography and profile of Leander Paes, Indian tennis player. Leander Paes is one of the best Indian Tennis Player. 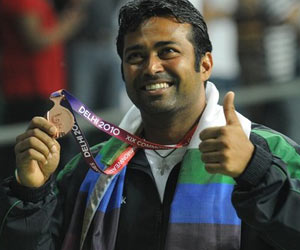 Leander Paes - Leander Paes emerged on the Indian tennis horizon by wining the Wimbledon Junior title in 1990. Since then this tennis stalwart has been representing India at various international tournaments. Leander has brought glory to India by winning many events, of which the Davis Cup and the bronze medal at the Atlanta Olympics is worth mentioning.

Achievements And Accolades
Leander Paes started his tennis journey in the international tennis arena by winning the Wimbledon Junior title. For some time Paes remained the number one junior player in the world. A permanent member of the Davis cup team, Paes won a bronze medal at the Atlanta Olympics in 1996. Leander along with Mahesh Bhupati created sensation in the international tennis by winning many of the coveted Grand Slam doubles titles including the Wimbledon and the French Open tournaments. The Indian tricolor always takes the best out of him. It is very well evident at the Davis cup, where he has downed tennis greats year after year.

Early Promise
Coming from the family of sportspersons, Paes showed an early aptitude for sports. Leander's father, Vece Paes was a member of the Indian hockey team which won a bronze medal in the 1972 Munich Olympic Games and mother, Jennifer a member of the National basketball team. Leander began playing tennis at the age of 5. Seeing the talent and potential in the boy, the Britannia Tennis Academy, run by the Amritraj family, picked him for focused training.

Turning Point
When Leander was still in school, he was picked up by the BAT academy for further refinement of tennis skills. Leander created sensation in the international tennis arena by winning the Wimbledon Junior title in 1990. This event proved the turning point of Leander's tennis carrier. 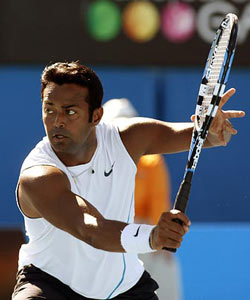 Leander Paes was born in Goa on June 17th, 1973. His father was a member of the Indian hockey team which won a bronze medal in the 1972 Munich Olympics, while his mother, Jennifer was a National basketball player. From the very beginning Paes had acumen for tennis and he started playing the game at the age of just 5. Leander later went to the BAT academy for specialized training in tennis. Paes started his tennis carrier with a bang by winning the Wimbledon Junior title in 1990. Paes' record at the Davis Cup has been simply superb, where he has grounded players much higher in ranking than him. Leander also won a bronze medal at the Atlanta Olympics in 1996. Greatest laurels for Paes have come in the doubles, where partnering Mahesh Bhupati, he has won many grand slams including the Wimbledon and the French Open. Leander has also won many mixed doubles title in his illustrious carrier. Leander is a bachelor and remains out of India, most of the times, for his tennis tournaments.

Ups And Downs
Leander Paes showed a lot of promise and prospect by winning the Wimbledon Junior title in 1990. Though, he has won many doubles titles (and remained the number one pair along with Mahesh Bhupati for a long time) and has many Davis Cup exploits on his name, Leander failed to keep up the promise he made in 1990. Leander Paes has not been able to win many singles titles as was expected of him.