This write up contains a short biography and profile of Sania Mirza, Indian tennis player. Sania Mirza is one of the best Indian Tennis Player. 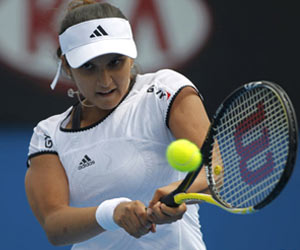 Sania mania - The Sania mania is sweeping India. It is after a long time when a young person other than Sachin Tendulkar is making waves in the Indian sports circle. Sania Mirza is the new icon of Indian youth and sports. She is the first Indian women tennis player, who is knocking the door to reach on top of the tennis court. Sania Mirza has shown the rays of hopes for others to adopt tennis.

Achievements and Accolades
Wimbledon girl's doubles title was the way to fame for this tennis sensation from Hyderabad. Sania became the Second Indian girl after Nirupama vaidyanathan to play in the Grand Slam tournament at the Australian open. It was after 51 years that an Indian girl figured in the final of a Grand Slam, the last being Rita Dabur, who had finished runner-up in the singles event in 1952.

Sania Mirza lost after giving a tough fight to Selena Williams in the third round of the Australian open. But her spirited fight proved that she has the guts and potential to take the tennis world in her stride.

The tide of her Australian Open exploits had hardly died down when Sania again pole vaulted back to fame by winning the WTA tennis title in her hometown of Hyderabad. Hold back, the recent Dubai open gave her the title of the giant killer when she downed the reigning US Open champion, Svetlana Kuznetsova.

Early Promise
Sania played her first international tournament in 1999 when she represented India at the World junior Championship at Jakarta. She has also appeared till the semifinal round of the French Open girls' doubles and in the girls' singles at Wimbledon where she suffered a second round defeat. 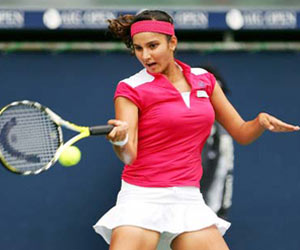 Sania Mirza Biography
Born in Mumbai on November 15, 1986 to Imran and Nasima Mirza, Sania started playing tennis at the age of six. She started practicing under CK Bhupati, Mahesh Bhupati's father and first started playing tennis at the Nizam club in Hyderabad. She learnt the professional game at Sinnet Tennis Academy in Secunderabad before finally moving to Ace Tennis Academy in the USA.

Ups And Downs
Sania Mirza has started her tennis carrier on a promising note and has miles to go to reach the zenith of her carrier. At present the graph of her carrier is moving positively and showing an upward.