Karma Yoga is a type of yoga associated with Bhagavad Gita teachings. Know more on Yoga of Action or Karma Yoga. 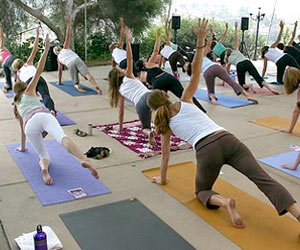 Karma Yoga - Karma Yoga is that branch of Yoga philosophy that stresses upon righteous actions. Formerly, it was assumed that the practice of Karma Yoga, conveyed by the adherence of certain sacraments, would escort to emancipation from the cycle of birth and death.

In the holy text of Srimad Bhagavad Gita, Lord Krishna broadened the semantics of the term karma to connote isolated action, that is, to conquest one's individual will to Divine purpose.

The text also states that jnana, bhakti and karma are three different paths of yoga that come handy to define three different categories of men-reflective, emotional and active, respectively. They are just demarcated on account of the allocation of accent on the hypothetical, poignant and practical aspects of human personalities.