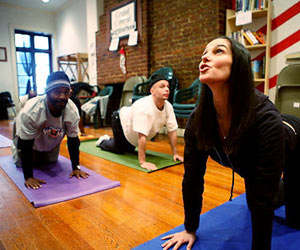 Purna Yoga - The Yoga philosophy of sage Patanjali administers a total development of any one of these human faculties namely the mind, emotions, life-force and the physical body. It is this state of partial perfection which is then permitted to dribble over to one's whole being.

Following are the main stages of Purna Yoga:

The very first step of the Internal Yoga is a realization of the Divine within oneself. And this state of divine awareness can only be attained by a continued practice of either meditation or prayer. Then comes the next step of realizing the providence even in the entities beyond one's own subjective self. This stage involves accepting the fact that all the living beings have a common origin. The third stage of Purna Yoga involves a state of true identification of the "Transcendental Divine", whose existence is not limited to any individual or within any other constituents of existence. Sri Aurobindo believed that without the realization of this crucial truth, stated above, no seeker, whosoever can attain liberation. Coined as "Sacramental Consciousness" in the Aurobindo philosophy, this state of higher consciousness is considered potentially the definitive tread on the ladder of human evolution. And the realization of this doctrine only is the central aspiration of Sri Aurobindo's Purna Yoga or Integral Yoga.