Raja Yoga is regarded as one of the leading yoga therapies. Know more on Raja yoga and its health benefits. 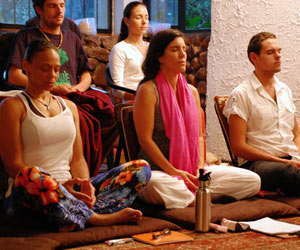 Raja Yoga - Another branch of the Yoga philosophy known as Raja Yoga is somewhat royal in nature. Owing to the Sanskrit meaning of the word Raja, this yoga is also referred to as 'royal road' or the 'royal path.' This type of Yoga puts forward a comprehensive method for scheming waves of thought by directing our mental and physical energies into spiritual energy.

Raja Yoga or Ashtanga Yoga, was invented by Patanjali into an unambiguous system from classical yoga. It forms one of the Shad-Darshanas or classical systems of Indian philosophy. This school of Indian Philosophy prescribes such a meticulous meditative system that focuses on the scrutiny and control of the field of human consciousness.